Those of us, like Mrs Cheveley, who are fond of calling things by their proper name, would struggle to categorize Declaring His Genius, by Roy Morris, Jr.

Let us start with what it is not. It is not profound enough to be a serious biography of an American Wilde—and, to be fair, it might never have been published if it were. Besides, one would not expect such an approach of a book that asserts that ‘Wilde may well have been a genius—at self promotion, if nothing else’ [my emphasis], which makes one wonder whether the author is convinced enough of Wilde as a thinker or writer to produce a critical study.

But neither is the book what it purports to be, which is an account of Wilde’s time in America—at least not exclusively. This is because the Wilde story Morris gives us is full of holes. By this I am not referring to the wealth of factual errors throughout the text which need only be problematic for the Wilde historian. As such there is no need to dwell on them here, beyond noting that the Introduction signals this disregard for integrity by adhering to remarks that sound ‘like something Wilde would have said’, explaining that the book ‘depends to a certain extent on anecdote, word of mouth, and local legend.’

No, by holes I mean the opportunistic detours the book takes from a rounded theme of Wilde’s American tour which Morris fills with square pegs. The result is a flawed schema that places its protagonist amid an anthology of sometimes tangential, but often downright irrelevant, populist history.

Curiously, however, Morris does not provide this sort of extraneous information egregiously: it’s just that he does not care to differentiate between diversions which underpin his theme and those that undermine it.

For instance, in setting the scene for Wilde’s arrival in America, Morris appropriately provides the context of the industrial might of the Centennial Exhibition as a contrasting backdrop to Wilde’s emerging aestheticism and interest in women’s issues. Moreover, he does this with some good expression and well found historical social commentary. But it is not long before Wilde is in the midwest where we learn that one of the suspects in the cause of the Chicago fire eleven years earlier was Mrs O’Leary’s cow.

Typical of this unbridled approach is the picture Morris paints of San Francisco. After poring over a list of local eccentric characters he eventually singles out the virtually unknown Joshua Abraham Norton, about whom we are treated to a whole page detailing his history, habits and, for some reason, the names of his dogs. It doesn’t seem to matter that the man was unconnected to Wilde, unconnected to any possible narrative about Wilde, and had died two years before Wilde even arrived in America.

Therein lies the problem of identity. Were the book intended as a generalist compendium of the period—something which the author comfortably demonstrates his ability to deliver—it would have been criticized for gratuitously appropriating second-hand anecdotes about Wilde; while as a specialist history of Wilde’s lecture tour it lapses too easily into being a generalist compendium. Thus the project self-fulfills its remit: it is an Oscar Wilde book written by a Civil War journalist.

As a generalist in a Wilde sense, Morris does not engage in too much original analysis or interpretation. There is no new scholarship. He is content to readily cite Wilde sourcebooks by Mary Blanchard or Lewis & Smith. Nonetheless, he does this fastidiously where necessary, such as when he elucidates the identity of Wilde’s valet as given by Ellmann. This methodology reveals Morris as a man of details. He is assiduous in identifying anachronisms in Wilde’s early play Vera, which, despite being set in the late 18th century, includes some allusions from the late 19th century, when it was written. One is grateful for this as it is seldom mentioned. Morris also creditably recognizes the writings of Mary Eliza Haweis, another valuable, but less often mentioned, progenitor of Wilde’s aesthetic philosophy, especially as it relates to dress.

Morris’ penchant for the particular is also realized in his pointing out, perhaps too pedantically, that the flower which Lillie Langtry is seen holding in Millais’ painting of her, is not a Jersey Lily but rather the genus Guernsey Lily. In a more worth while pursuit, perhaps, Morris’ observation extends to the woman herself, and I tend to concur with his challenging of Langtry’s supposed status as a beauty, although he is generous and wise enough to recognize that tastes change.

It follows, then, that Morris’ working sense of Wilde texts employs a historical eye for detail rather than critical feeling for comprehension. This is exemplified in the way he nicely couples the aesthetes’ sensibilities about furniture with Wilde’s later aside on the subject in The Soul of Man Under Socialism (1891)—but without mentioning that the essay is not principally about design and that Wilde said the same things at greater length almost a decade earlier in his lectures.

Detailed though he is, Morris has vision enough not to succumb too easily to Wildean apocrypha. For instance, he is correctly suspicious of Wilde’s death bed quotation about the wallpaper —’one of us will have to go,’ (which Wilde may have said, but certainly not as he lay dying). He also helps to propagate the trend in recent biography of doubt towards Wilde’s alleged ‘nothing to declare but my genius’ quotation at New York Customs. This is pleasing as Morris extends (albeit without credit) my identification of Ransome as the earliest source of the alleged statement in a 2002 article that sets the current tone of skepticism. Perhaps, in this respect, the cover of the book signals its uncertainty: it is as if the title Declaring His Genius had been decided upon before the author researched the remark.

Conversely, however, the author misreads Wilde’s approach to his namesake Clara Morris by mistaking Wilde’s appraisal of her acting as genuine. In reality Oscar’s opinion of her was merely his trademark flattery intended to seduce her into accepting his play, and Wilde was, in fact, later critical of her acting and character.

The latter-day Morris also asserts that Wilde won the Newdigate prize ‘almost as an afterthought’ and surprised ‘himself, by graduating from Oxford.’ This is a simplistic reading and a good example of falling prey to the anecdotal Wilde. The evidence is that Wilde studied hard to achieve his college distinctions. As Merlin Holland (Wilde’s grandson) has explained, it took ‘considerable application as his contemporaries later testified and his surviving Oxford notebooks demonstrate’. [1]

The lack of thoroughness is disappointing because the early signs of the book are promising. There is a sometimes pleasing command of sentence structure buoyed by a lively step along the well trodden path. But any hope that the book would expand into a nuanced, postmodern, view of Wilde is not realized. It is clear that Morris does not regard coherence as essential to biography, but neither does he think of it as a flaw. This is evidenced by two pages that detail the Guiteau trial after which Morris nonchalantly begins the next paragraph by saying that Wilde took no notice of it. This failure to see Wilde in a connected way reveals a lack of critical interpretation. Perhaps that is why the more one reads, the more the book tends towards formula, and the method of composition settles down into a series of snippets of Wilde interviews and articles pieced together with potted biographies of selected personalities.

Some of these personalities have relevance to Wilde’s time in America, such as D’Oyly Carte’s representative Colonel W. F. Morse or his touring manager J. S. Vale, but they warrant no biography at all. This is no doubt because little is known about them, but was this not the opportunity to try and find out? Even for others, of whom biography is known, the identification is ill-disciplined. In mentioning Florence Balcombe, Wilde’s first love, we do not learn, for example, how Wilde’s previous experience with women might have informed his social activity in 1882; but we are told, as if it mattered, that over 40 years later Balcombe tried to destroy all known prints of the silent film Nosferatu. Or, in the case of George Siddons Murray, the captain of steamship Arizona on which Wilde crossed the Atlantic, it seems legitimate to tell us a little about his background, but shouldn’t we have been spared the theatrical career of his great-grandmother? Even Jumbo the elephant, who also toured America in 1882, need have no fear of being under-trivialized, for while it is tempting to remind us that Jumbo now means large because of the elephant’s name, did we really need to know the Swahili derivation of the word? 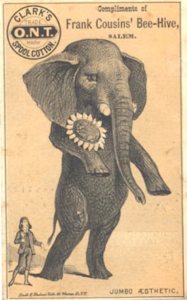 With semi-related characters, Morris is equally fickle. Nat Goodwin, as a minor vaudeville comedian who happened to pop in to see Wilde between acts, may be tangential, but irrelevancy is stretched to breaking point when we are told that his future fifth wife would one day be a friend of the, as yet, unborn actress Evelyn Nesbit.

Or, take Thomas Wentworth Higginson whose sole connection to Wilde was that he had written an article about him in February 1882; yet he is given more than three pages of padding during which we are invited to learn about his war record down to the scar on his chin—another example of Morris’ all too often reverting to his military roots. Indeed, the miltary tone is set early as the book begins by saying that Americans were still reeling from the Civil War. Whether they were or not 17 years after the event is one thing, but suggesting that Oscar’s knee breeches would alter their thinking about masculinity, as if that were some sort of postwar reaction, is a little absurd.

As for characters who are unrelated to Wilde, one might hope that Morris would be more circumspect, but again one would be disappointed. So any reader intent on exploring Wildean adventures is subjected to tales of US senator James Lane hiding in a cornfield almost 20 years earlier, Winston Churchill visiting the zoo aged 8, and Abe Lincoln not resting easy ‘these days’ which in Morris’ terms means a grave robbing story that occurred in 1876. The question of how low such irrelevant trivia might be plumbed is settled by a passing reference to P. T. Barnum who, we are told, once owned a shaved monkey with a ‘fishtail glued to its bottom.’

Taken on these terms the book may have a purpose for non-Wildeans seeking an introduction to this period of his life, or for specialists not averse to a capricious treatment of their subject.

My conclusion is to revert to channeling Cheveley, whose reason for calling things by their proper name was that it makes everything simpler. So let us be concise about the book’s measure: it seems longer than it is, broader than it needs to be, but not as deep as one would have hoped.