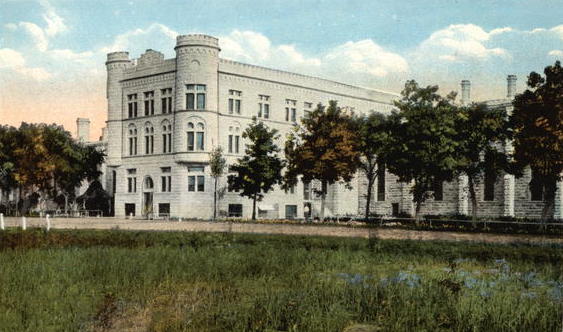 Ever on the lookout for notable incidents from Oscar Wilde’s lecture tour of 1882, I bring to your attention to the hitherto unnoticed occurrence of Oscar’s visits to TWO American state prisons within the space of three days.

As I noted on this page, Oscar Wilde visited the State Penitentiary near Lincoln, Nebraska on the day of his lecture there on April 24, 1882. This event was picked up by the Paris Review in a recent article in which they said it was “the first time Oscar Wilde saw the inside of a prison”. I can now correct that assertion by two days.

If we interpolate the chronology of Wilde’s lecture tour, the above report means that Wilde visited the Kansas State Penitentiary at Lansing (now the Lansing Correctional Facility) on April 22, two days before his visit to the corresponding establishment in Lincoln, Nebraska, thus providing a curious twist on Wilde’s accepted social activity in 1882.

What was he up to? Prisons are not generally considered tourist destinations, yet Oscar took the opportunity of visiting two of them in quick succession: one during a train stop while traveling, and another on the afternoon before an evening lecture. Did he have a special interest in prisons? Or, given his vow to gain notoriety, was he prefiguring life on the inside as a pathway to immortality?

All this brings us forward to Oscar’s eventual alma mater Reading Gaol, without mention of which no article about Wilde and prison would be complete.

But not wishing to retread the road to ruin, I thought I would take a lighter tone with Reading Gaol and confess to being a confirmed orthoepist. In fact, I am one of the most advanced orthoepists I know, something I realized shortly after looking it up in the dictionary.

An orthoepist is someone who is interested in the pronunciation of words, which is cute because I can’t pronounce orthoepist.

This is probably owing to the presence of adjacent vowels that are so prominent in Reading Gaol. Not only that. Reading Gaol is a name that should evoke Wilde’s remark that Britain and America are two nations divided by a common language, because nowhere in Wildespeak is cross-pond compliance more pronounced than when the words Reading and Gaol are pronounced.

Wilde first made the remark about transatlantic language in The Canterville Ghost, so it is appropriate that one American with the necessary locution to Anglicize the prison’s name would have been the resident of Canterville Chase Mr. Hiram B. Otis. This is because Oscar located Otis in his English pile at Ascot, less than 20 miles from the town of Reading, thus making it likely our American Minister would know that the neighboring place is not reading as in reeding, it is Reading as in Redding.

In this vein, I should mention that Ascot and Reading are both in the English county of Berkshire, which I was afraid I might also have to translate as being pronounced Berks as in barques, not barks as in Burke’s; just as it’s clerks as in Clark’s, and not clarks as in clurks. Fortunately, there’s also a homophonic Reading in Pennsylvania, so I don’t have to bother.

The Balance of Reading Gaol

Getting the balance of Reading Gaol correct, however, does not only mean achieving the right reading when you write Reading; we also need to ensure when writing Gaol that people are reading jail.

The problem with the word GAOL is that it looks like goal owing to those tricky vowels AO seemingly transposed in the variant spelling of jail—a Francophone curiosity that dates back to when the Normans first uttered the archaic Latin for cave that gave us gaole. Fortunately, this usage is now virtually obsolete so people can be utterly forgiven for the goal/gaol chaos, although I am still apt to misspell the word Pharaoh. I never did trust French letters.

All I know, having studied notoriously exiled Parisian bi-lingualists, is that the G tends to be soft in gaol (as in jail) but hard in goal (and in Gaul). ‘Twas ever so I should imagine. However, I shouldn’t speculate, not being qualified to offer oral guidance on French diction particularly the practice of getting one’s tongue around Gallic diphthongs.