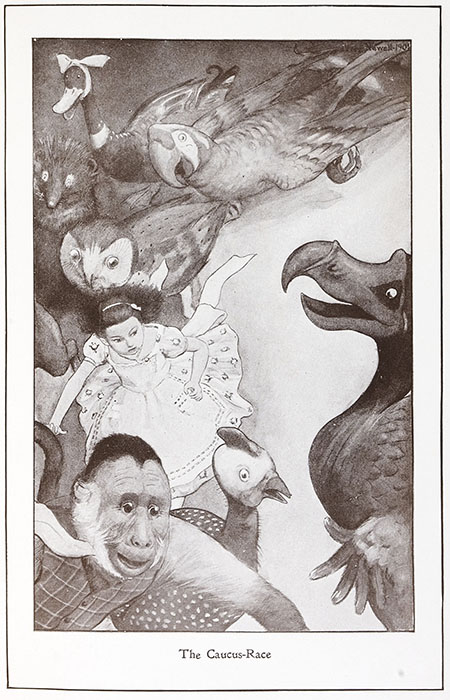 In Alice in Wonderland there is a “caucus-race” which involves all concerned running around in a circle until eventually everyone is declared the winner.

With this allusion, Lewis Carroll gently satirizes the futility of political processes—which is topical while the US focuses on the US caucuses, which begin today in Iowa.

By punning this notion of convention bending, and perhaps prompted by Carroll’s circuit of mockery, I return to the altogether less raucous focus of The Aesthetic Movement, which, by the time it reached Iowa, had already selected its candidate: Oscar Wilde—no stranger himself to bending conventions—who lectured four times in the state.

You could be forgiven for thinking that Iowa’s claim to fame is being the only US state with an abbreviation consisting of two vowels (IA).

These lectures are documented on my web site as follows:

For the record, previously published itineraries of Wilde’s tour show him lecturing in Fremont, Iowa. In fact, Wilde lectured in Fremont, Nebraska. Similarly, Wilde did not lecture in Rock Island, Iowa; Rock Island is in Illinois.

I shall continue to verify Wilde’s tour, which, fittingly like the political process, ends in November. Until then, when it becomes a thing of the past, I shall take the advice of the similarly erstwhile Dodo who announced Alice’s caucus-race in Wonderland by saying: I move that the meeting adjourn for the immediate adoption of more energetic remedies.