Next month I go to speak at the Oscar Wilde conference “Wilde on the Borders” at Niagara University in Niagara Falls, N.Y.

Whenever I travel to give a talk on Wilde, especially to places such as in New York City, Brooklyn, or Philadelphia, where Wilde also lectured, I always feel that I am following in his footsteps. After all, we share the same mission: that of promoting Oscar Wilde.

Going With The Flow

It is the now the turn of Niagara Falls, and, although Wilde did not speak publicly there (he lectured in nearby in Buffalo, New York), he did take a sojourn from his tour to visit Niagara and play tourist for a couple of days.

The reason for Wilde’s needing a rest was that his lecture in Buffalo, New York on February 8th, 1882, was his twelfth lecture of the tour overall, but his seventh in nine days, and he was beginning to weary of the travel.

“But I’m dreadfully tired…it isn’t the lecturing. I delight in giving my lectures when I find there is interest in them, but it’s the long distances. The traveling has nearly used me up. I haven’t been used to it you know. At home I’d get up in the morning, have breakfast, do some writing, and then maybe start off for Egypt or some other distant port, but take my time about it all.” [1]

Fortunately for Wilde, the Buffalo lecture was a rare matinee, and there was time for him to take a much needed break with a visit to the Falls. So he courteously declined social invitations for the evening, and boarded the 6:10 PM train over the Central Railroad to Niagara, some twenty miles to the north of Buffalo.

Today there are twin cities of Niagara Falls.

The other is in Ontario on the Canadian side [3]. This is the one Wilde visited and he put up at Prospect House [4] here pictured in 1880.

This was the first time (of three occasions) that Wilde crossed the border into Canada, and no doubt he was aware of Canada’s fairly recent status as a self-governing dominion of the British Empire, for he wrote a message in the hotel album with characteristic hyperbole designed to indulge his post-colonial host [5]:

“The roar of these waters is like the roar when the mighty wave democracy breaks against the shores where kings lie couched at ease.”

Since Wilde’s arrival in New York for his tour of America, much had been made in the press of his remark that he was disappointed in the Atlantic Ocean.

Now at Niagara Falls, Wilde was confronted by another majestic embodiment of the natural world, and was again moved to apparent meiosis.

“When I first saw Niagara Falls I was disappointed in the outline. The design, it seemed to me, was wanting in grandeur and variety of line, but the colors were beautiful. The dull gray waters flecked with green are lit with silver, being full of changing loveliness, for of all the most lovely colors are colors in motion. It was not till I stood underneath the Falls at Table Rock that I realized the majestic splendor and strength of the physical forces of nature here. The sight was far beyond what I had ever seen in Europe. It seems to me a sort of embodiment of pantheism. I thought of what Leonardo Da Vinci said once [6], that “the two most wonderful things in the world are a woman’s smile and the motion of mighty waters.” [7]

Reports telegraphed back to New York from Ontario probably trailed off after Wilde’s salvo of continued disappointment with all things North American, and the press seized upon the opportunity for more ridicule.

It should be noted, as a general rule, that contemporary observers failed to see Wilde’s avant garde penchant for abandoning the truth for the sake of an epigram, or to sympathize with his deliberately arch sensitivity to natural beauty.

So he continued to capitalize on his Niagaran notoriety, presumably favoring fame over obscurity in spite of the ridicule, as can be seen in these examples [8]: 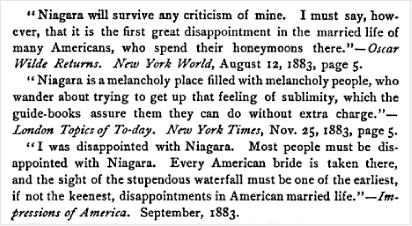 In preparation for following in Oscar’s footsteps to Niagara Falls next month I decided to see if it could be done literally.

Comparing this old map (below) with Google Street View, I have calculated that it is possible to stand in the same spot at Prospect House where Oscar leaned over to view the Falls. No doubt I shall be misty-eyed.

But if I can recapture firsthand a similar Wildean stream of consciousness I shall report next time on the ratio of beauty to disappointment.

See you on the other side. 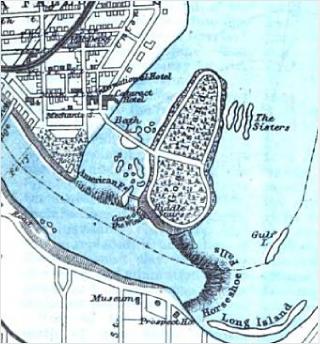 * The location of Prospect House beside Horseshoe Falls
on the Canadian side is marked at the foot of the map.

[2] The City of Niagara Falls, NY was incorporated on March 17, 1892 from the villages of Manchester and Suspension Bridge, which were parts of the Town of Niagara in the southwest corner of the county, a settlement originally founded in 1812 as the “Town of Schlosser”.
(Wikipedia)

[4] There were other hotels known as Prospect House in the area before and after this one, the name presumably popular because of the view afforded of the Falls from the now collapsed plateau of Table Rock.

[5] This is the same album in which Sarah Bernhardt wrote, “How good is God to make such beautiful things.”

[6] Probably not said by Da Vinci any more than Wilde’s assertion of that Dante inaugurated the saying “painting the town red”. More on Wilde  anon. JC.