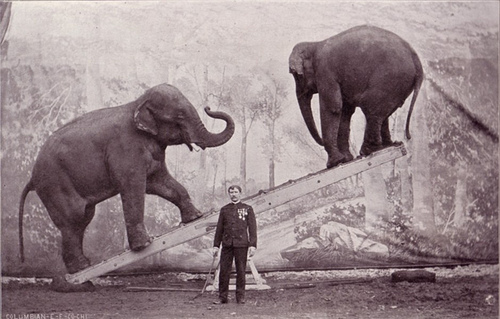 If I am to find Wildean relevance in topical US culture, there is a latter-day Nellie the Elephant in the room. And before proceeding, I should explain that twisted metaphor for the uninitiated.

I refer to the UK children’s novelty song of that name, and in particular to the eponymous pachyderm who was celebrated in the oft-repeated chorus for going off with a trumpety-trump, trump, trump, TRUMP! Apparently, it’s a sound elephants make.

And like any other annoying refrain stuck in one’s head, it’s a word currently hard to ignore. So reluctantly I must  face it—the capitalized version that is—before we send in the clowns and say goodbye to the circus that is becoming politics in America. 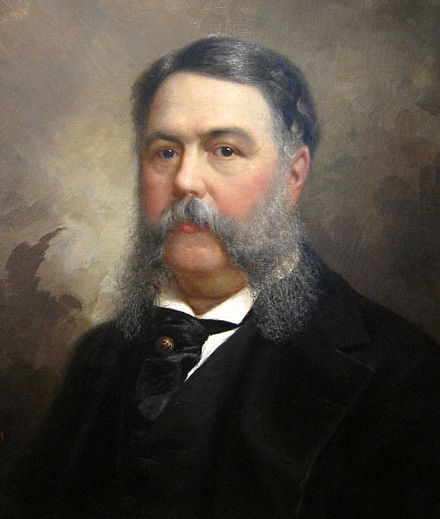 Not that politics was much different when Oscar Wilde arrived here in 1882.

The president then was a bewhiskered man of elegant tastes: one Chester A. Arthur, who was famous for being enjoined to make (and not for much else) this prescient plea:

“I may be President of the United States, but my private life is nobody’s damn business.”

Good advice for many a president you might think.

Unfortunately, we cannot adhere to this politically-correct view of privacy if we are to find a Wildean link to the new administration. 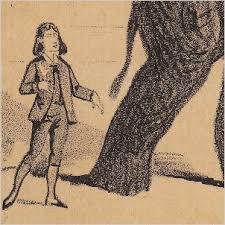 This is because the only similarity Messrs. Wilde and Trump have with politics is the unfamiliarity they have with politics, and so, paradoxically, we’d have nothing to talk about. Besides, it is only by invading the wildlife of the trumped-up President and our Jumbo-rival that we find some common monkey business.

From Oscar Wilde to Donald Trump, scandals involving the rhythms of the jungle sometimes require a safari into some impenetrable places. And, before I start a stampede away from this missive, let me reassure you that for our limited purposes, we shall not venture much further than the superficial act of kissing.

In this respect the damning parallel I refer to, of course, is the art of clumsy self-incrimination.

Wildeans will know that Oscar’s case against the Marquess of Queensberry turned upon the moment when he was asked by Edward Carson if he had ever kissed Walter Grainger, a servant in Bosie’s rooms at Oxford. Wilde said no, adding that Grainger was a peculiarly plain boy. When pressed Wilde explained:   “his appearance was so very unfortunately – very ugly – I mean – I pitied him for it.”

And with that the trial began to unravel as Carson homed in on the mea culpa inherent in Wilde’s denial. The cultured pearl had revealed a grain of truth.

Similarly, when the uncultured Donald Trump, under the modern cross-examination of a TV interview was accused of forcibly kissing a woman, he said: “Look at her…you tell me what you think. I don’t think so.”

The conspicuous question of ‘what the hell were they thinking?’ is largely moot because such remarks come to us unencumbered by the thought process.

They are the result of an extrovert speaker suddenly forced into introspection by the tension of truth or the stress of shame. Under the former, personal composure devolves into social comedy; under the latter, the social filter devolves into personal flippancy. Either way, the result is the wrong thing to say. The degree of truth revealed is irrelevant. What matters is not just that these are ill-advised words to use in public, but that they are also unkind things to say in private. They say nothing you want know about the subject of the remark, and everything you need to know about the speaker.

The larger question for the historian is whether there is any legal or moral equivalence in the two cases. There are couple of problems with this line of enquiry.

First, the correlation may be a little unfair to Wilde because his activities were consensual, although this is tempered by the contemporary notion of his being a corrupting influence—indeed, the judge in his trial said as much in sentencing.

Second, is that over a century separates the two examples. We know that in their own times both men were accused of contravening the law: Wilde for gross indecency and Trump for alleged assault. So that doesn’t get us very far.

But it does gives us a clue. Consider what happens if  we reverse the positions and evaluate how their behavior would be received in each others’ time period.

Looked at this way we discover a satisfying reversal of fortune.

This must be progress.