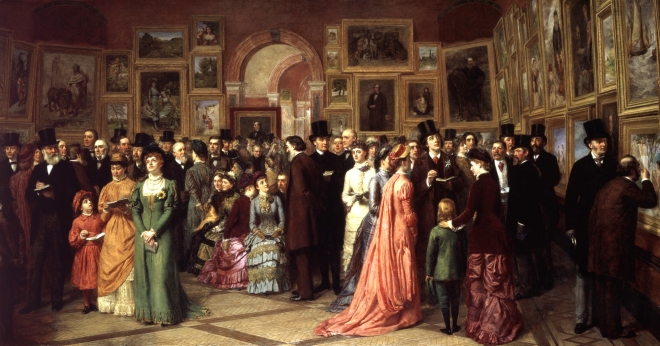 MORE OF THE MYSTERY SOLVED

In a recent article I established the literary source for the cello coat worn by Oscar Wilde at the Grosvenor Gallery. However, I left it open to interpretation whether Wilde actually did have such a coat tailored or, perhaps, just happened to have one like it. After all, there was only one report of the “cello” shape.

However, we can now be definitive.

Further research allows us to make the coat story complete—although, as we shall see, the archaic variant word compleat would make for a better fit.

The Portrait of Mrs H. W.

Previously we had seen how Mrs Humphry Ward in her diary painted a picture of Oscar’s coat in the shape of a cello. And while it remains true that hers is the only description of the coat specifically in a “cello” shape, it turns out that she was not the only person to have noted Wilde at the Grosvenor, and other galleries, wearing a specially stylized coat of his own design.

The key to finding these corroborating references lies in the timing of the occasion, and, again, Ellmann is responsible for initially misleading us. The problem is with the year 1877.

Ellmann says that the Grosvenor Gallery event (at which Oscar wore the coat) was the inauguration of the gallery in 1877— an idea he reinforces by referring to it as Oscar’s “London debut”. This is an understandable assumption given that Wilde was actually present.

But he was present only as a rusticated Oxford undergraduate there to write a review for a college magazine.  A little early one would think, even for Wilde, to be impacting the London fashion scene (his “dress” period was much later). And, if we recall that 1877 was three years before Polish actress Helen Mojeska famously expressed ignorance about who he was, and what he had done, it is unlikely that a society lady would be recording “the latest story” about him. The reality is that Wilde did not effectively come down from Oxford to London until early 1879.

But what really makes the Ellmann date of 1877 suspicious is that Mrs Humphry Ward’s diary (Ellmann’s source for the story) is a record of the 1880s—according to the editor’s note the diary begins only in 1879. Further, the diary does not actually mention the inauguration, nor even an “opening” event: it merely refers to the occasion as a Private Viewing, of which there were many. Finally, while the published diary is arranged thematically, it is arranged within its themes chronologically, and the coat story is noted after the events of 1884.

By examining the record we can eliminate many years of the 1880s when either Wilde or Mrs H. W. could not, or did not, attend the Grosvenor Gallery; indeed it necessarily makes sense to focus on the opportunities they had of attending together. From research it becomes clear that the occasion could not have been before 1885 nor after 1887. I will not detail the process of elimination here, because the following newspaper reports sufficiently identify the year.

1885 was a central year in Wilde’s advocacy of dress reform.

Oscar had begun to express an interest in dress during his lecture tour of America in 1882, and as I wrote in my book On Dress: [1]

Wilde’s subject matter was becoming increasingly practical, increasingly interior, and increasingly individual. It was as if he was turning the telescope around for a narrower view, one that would eventually focus on dress.

During the American tour Wilde requested only one book concerned with dress for use as reference material: The Art of Dress by Mary Eliza Haweis. From that book the following is suggestive: [2]

In October 1884 Wilde gave his first lecture on “Dress” and by 1885 he had written his (recently discovered ) essay The Philosophy of Dress which he sent to the New York Tribune—where it was printed in April of that year.

Meanwhile, Wilde was busy lecturing on the subject of dress across the UK and Ireland. When he reached Dorchester, in February, he might have telegraphed his intentions when he told the audience (to some laughter) that, “a man’s coat was a garment that had a back but no front, and a waistcoat had a front but no back.” He concluded by suggesting the two should be amalgamated. [3]

Not surprisingly, clothes became a recurring Wildean theme in the press, particularly his preoccupation with coats. [4]

This was appropriate as it was around this time that Wilde would have had the coat made. It is possible that he did this in preparation for the London Art Season beginning in the last week of April, when private viewings and public openings occurred at all the famous galleries.

It is apparent that Wilde wore the coat at more than one of these events. For instance, the Northern Echo reported Wilde at the Private Viewing of the Royal Academy on Friday, May 1 in “his brown frock coat, designed by himself”. [5]

So we conclude that Oscar Wilde’s cello coat debuted in the Spring of 1885.

Welcome to the Fold

Reports soon gave a clue to how the fit of the coat had been produced. We see from this parody that the shape was achieved by inserting pleats into the back of the coat.

Other journals seized upon the opportunity to continue the ridicule of Wilde. In the magazine Truth, the regular contributor “Madge” in her Girl’s Gossip column told her followers:

We have just got back from the Private View at the Galleries of the British Artists in Suffolk-street, where we were much interested by the crowd of people assembled…We fell anew into ecstasies over Mr. Oscar Wilde’s coat, with its marvellous pleats at the back.” [6] [7]

Later that year a satirical cartoon sheet, “Funny Folks“, took inspiration from the article in Truth to aim an admirably comic verse at Wilde entitled “The Consolation in a Coat“: [8] It had to end.

By the 1888 season, when Oscar putatively gave up the life of a dandy for the steady job of editing Woman’s World, he also abandoned the cello.

An account of the Private Viewing at the New Gallery that year informed us: “Mr. and Mrs. Oscar Wilde were to the fore; but what a different Oscar it is! No more long hair, no more strangely-cut coats, no more lilies, no more fantastic neckties. Oscar is an ordinary mortal, and he is a clever man and an agreeable companion.” [9]

Perhaps the cello coat was not Oscar’s finest moment. So let us give the last word this time to Wilde’s most caustic critic at the galleries, with a remark we can now better appreciate. I refer to the artist Whistler when he said, “Oscar —the amiable, irresponsible, esurient Oscar—with no more sense of a picture than the fit of a coat.” [10]

* I am grateful to Matthew Sturgis for his assistance and knowledge in the preparation of this article. Matthew is currently engaged on a major new biography of Wilde due for release in 2018.

[1] Oscar Wilde On Dress, John Cooper, CSM Press, 2013. Contains a detailed analysis of Wilde’s many dress influences, and Wilde’s essay The Philosophy of Dress in book form for the first time.