A previously unpublished autograph letter signed (ALS) by Oscar Wilde appeared a little while ago at auction in North Carolina. Aided by the letter’s evident authenticity and the fact that the consignor is a direct family descendant, it sold at auction for $5,500.

The item is a note sent by Wilde to Anne Lynch Botta, the 19th century doyenne of New York literary society, in which he expresses regret at not being able to attend a reception, owing to his impending departure for Canada.

We can use internal evidence from the letter to learn more about Wilde’s itinerary.

END_OF_DOCUMENT_TOKEN_TO_BE_REPLACED

In my latest post about Wilde in St. Joseph, I mentioned Tootles Opera House quite forgetting that I had blogged about its demise at the time.

What a shame. The venue where Oscar Wilde lectured in St. Joseph, Missouri in April 1882, was destroyed by fire on Monday this week.

No longer a theater, it may have been just another empty converted office building symbolic of a Midwest hollowed out by recession, but it was still there. Unlike so many of the Wilde’s lecture venues which were lost to fire in gaslit days, surely, one thought, this building had survived that fate.

But no, and here’s what makes the loss a little more personal.

Just a day earlier I had been discussing which city from Wilde’s lecture tour that I would most like to visit. No kidding. I said St Joseph, Missouri. One reason was that  both Wilde’s hotel and lecture theater were extant, and very few cities that can boast that—although there is one fewer now.

There was also much history attached to the city, and I have already featured the story of Wilde’s hotel on this blog here: Oscar Wilde’s Pony Tale, and thankfully that building remains. But we must now bid farewell to Wilde’s lecture theater. Somewhere, the grand chandelier grows dim one last time.

END_OF_DOCUMENT_TOKEN_TO_BE_REPLACED

A Rediscovered Photograph of Oscar Wilde

In my last article I alluded to how that erstwhile sinner, Oscar Wilde, had achieved the exalted air of sainthood. Unfortunately, for collectors of Wildean memories, with that classification comes the saintly cliché that a good man is hard to find.

And nowhere is that maxim manifested more in Oscar Wilde’s case than in the promised land of lost pictures. On the artifact scale of hardness-to-find, the rarest commodities are gold dust, hen’s teeth, and, hardest of all, previously unseen photographs of Oscar Wilde.

At least that was the case until earlier this year when this late in Wilde’s long posthumous existence (what the Native American appropriately dubbed the happy hunting ground), unearthed a little-known, and even less seen, image of Oscar. That photo has now ascended to the canonical next life as Sarony 3A. For Wildeans, this one discovery would normally be rapture enough. However, now another rare photograph has appeared from the digital clouds.

It is worthy of investigation.

END_OF_DOCUMENT_TOKEN_TO_BE_REPLACED

A rarely seen image of Oscar Wilde has recently been added to the series of photographs taken by Napoleon Sarony on January 5th, 1882.

Its rarity is evidenced by the fact that it does not appear to have been been published in any publicly available print medium to date, nor anywhere else previously online.

However, a proof print of it has lain dormant in the extensive Wilde holdings of the Harry Ransom Center, The University of Texas at Austin—in the James McNeill Whistler collection to be precise—and their copy might be the only extant print.

Let us see how this photograph re-emerged and how it affects the total count of known Sarony images of Oscar Wilde, let’s start the ball rolling.

END_OF_DOCUMENT_TOKEN_TO_BE_REPLACED

BACK TO THE BLOG

Apologies for the hiatus from writing articles for this blog while I took time out to attend to two parallel projects.

First is my historical archive which was in need of an update to latest web standards and to address improvements to usability. Click on this link to Oscar Wilde In America to visit the new site.

Also the interim I contributed a major article to the latest edition of the academic journal The Wildean, the flagship publication of the Oscar Wilde Society.  The article featured for the time ever in print all known photographs of Oscar Wilde taken by Napoleon Sarony in 1882 and 1883, as well as correcting existing and supplemented much new information about them. You can obtain copies of the journal from the Oscar Wilde Society here.

More on the web site here about ARIADNE IN NAXOS.

The web site upgrade is timely as it comes at conclusion of a ten year project of verifying and documenting Oscar Wilde’s lecture tour, which  I shall feature in a separate blog article in the new year.

Please visit the site and let me know of any errata. There are bound to be many as I have only one pair of eyes.

Readers will recall my visit to the New York Antiquarian Book Fair a couple of years ago where I was offered a very rare Oscar Wilde document.

It was a typescript of the (originally) unpublished portions of Wilde’s passive-aggressive prison masterpiece De Profundis.

It was prepared by Wilde’s literary executor, Robert Ross, for use in the 1913 trial when Lord Alfred Douglas (Oscar’s lover Bosie) sued a young Arthur Ransome for having the temerity to imply that a person he didn’t name just might have had a hand in Wilde’s downfall.

I politely declined to purchase the typescript, thinking it belonged much more appropriately within the hands (and budgetary means) of a public institution where visitors could see it.

Now, thanks to the power of the digital medium, everybody can see it.

END_OF_DOCUMENT_TOKEN_TO_BE_REPLACED 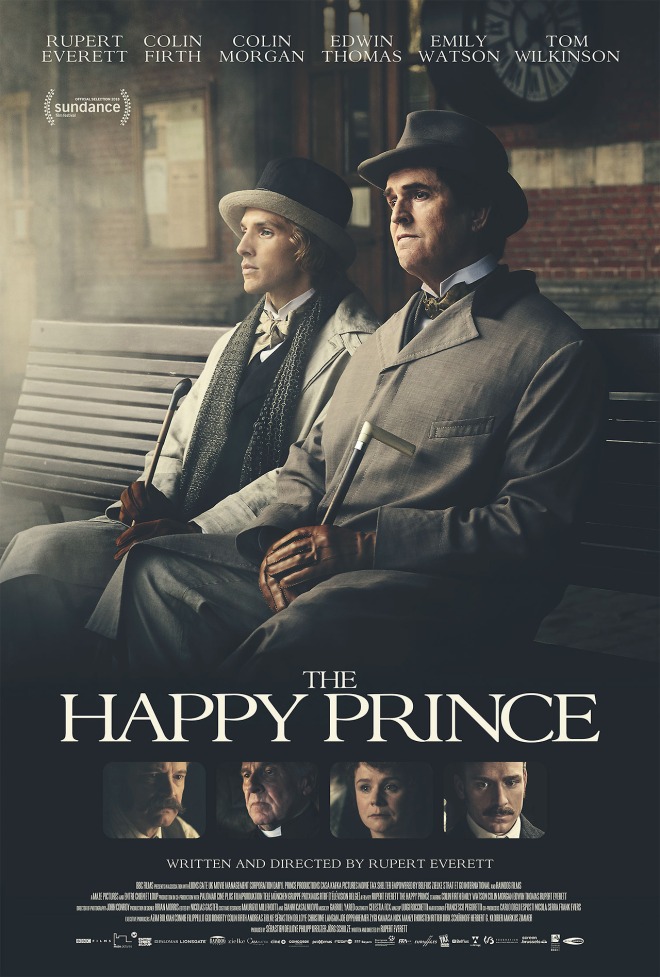 The 2018 Sundance Film Festival gets underway today, January 18th, and making its world premiere is The Happy Prince written and directed by Rupert Everett.

It is the story of the last days of Oscar Wilde—and the ghosts haunting them brought to vivid life. His body ailing, Wilde lives in exile, surviving on the flamboyant irony and brilliant wit that defined him as the transience of lust is laid bare and the true riches of love are revealed. Or so it says here.

The film features Rupert Everett as Wilde and Emily Watson as Constance, along with Colin Firth, Colin Morgan, and Edwin Thomas.

If you can’t get to Utah there will be coverage on the Sundance YouTube channel:
https://www.youtube.com/user/sff

END_OF_DOCUMENT_TOKEN_TO_BE_REPLACED

In the East Village of New York City there is a bar called Dorian Gray and this week I made my inaugural visit.

It styles itself as Simple, Cheery, and Charming—which it is, and that will have to suffice as a review as I was only there long enough for one drink. And therein lies a tale.

END_OF_DOCUMENT_TOKEN_TO_BE_REPLACED

So said Oscar Wilde in The Decay of Lying, one of the works included in Beautiful and Impossible Things, a new collection of essays plus the odd letter and lecture by Wilde, due for its U.S. release later this year.

Gyles Brandreth, the English writer, broadcaster, actor, and former Member of Parliament, has provided a solid Introduction to the book. Mr. Brandreth continues to bolster Wilde’s popularity in the U.K. and beyond, by efforts such as this, his being Honorary President of the Oscar Wilde Society in London, and not least by his successful Oscar Wilde Murder Mysteries series of novels.

END_OF_DOCUMENT_TOKEN_TO_BE_REPLACED

Oscar Wilde’s The Importance of Being Earnest at the Walnut Street Theatre, Philadelphia

With its marble columns and lobby posters of productions past, the Walnut Street Theatre is a venerable venue; and what other theatre can claim that Jefferson and Lafayette attending its opening night performance? [1]

Moreover, within the Walnut’s neo-classic Federal shell there is often the kernel of fine scenic design, tasteful costumes, and knowledgeable subscribers. One wonders, then, why a sledgehammer is usually employed to crack it?

Such had been the case on my recent visits to witness the repertory’s assaults on Agatha Christie and Noel Coward. So it was more with a sense of duty and dread, than enthusiasm, that my band of Philadelphia Wildeans revisited the scene of those crimes to see The Importance of Being Earnest. Would the Wilde play be similarly executed?