END_OF_DOCUMENT_TOKEN_TO_BE_REPLACED

You will recall the rediscovered photograph of Oscar Wilde (similar to the one above) that I featured in this post — where it was effectively published for the first time in almost 130 years.

The photograph had originally appeared in the March 10, 1893 issue of the Westminster Budget, in an article entitled “Mr. Wilde’s Forbidden Play” about Oscar’s French work Salomé.

At the time of that earlier post I expressed the hope is that an original print might come to light, but one has not done so yet. However, what has emerged is another copy of the newspaper, this time with a better quality image—now shown above.

So who do we have thank for this improved print?

END_OF_DOCUMENT_TOKEN_TO_BE_REPLACED

Memorabilia of Oscar Wilde’s Friends From World War I

Oscar Wilde, essential figure of the fin de siècle though he was, joked with Robert Ross that he would not outlive it. Oscar, who was usually right about everything, wasn’t far wrong: he died in November 1900.

He left behind friends who were to belong to a new movement, an artistic circle I might call the début du siècle, who inherited a world of change that was soon to become a world at war.

END_OF_DOCUMENT_TOKEN_TO_BE_REPLACED 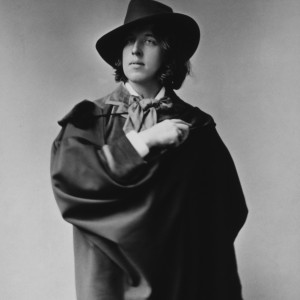 Oscar Wilde could be found almost everywhere in 1882

The phenomenon of Wilde’s US ubiquity has been well-documented, most recently in David Friedman’s Wilde in America (2014) which portrays Wilde as being so intent upon fame that he had a strategy for achieving it—a view with much validity.

Whatever Wilde’s personal strategy was, however, he was compounded in the effort by other factors: his own tour publicity, the popularity of Gilbert and Sullivan’s Patience and its burlesques, and a general curiosity of the people to see him. As a result, one might wonder whether it is possible to be too well known.

Take the world of advertising.

Wilde was such a cultural phenomenon during his American tour that his name was used by advertisers to generate media exposure for products with which he had no connection.