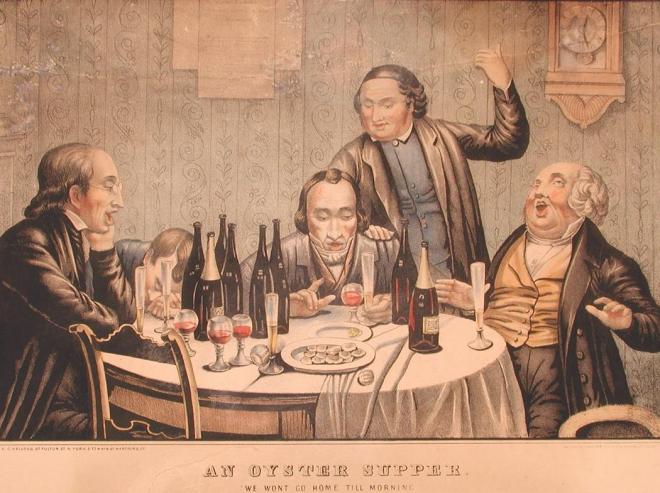 Eating oysters in Connecticut is a big thing; and when in Hartford, CT, there was only one place to go: Honiss’ Oyster House. In 1981 the New York Times ran an article about the famous old place, now long since gone:

It isn’t every restaurant in Connecticut that can claim – as the Honiss Oyster House Company does – to have served Mark Twain, Babe Ruth, Andre Previn and Steve Martin, or to have the very booth where Buffalo Bill Cody ate regularly when he was in town with his Wild West Show.

Honiss’s dimly-lit basement walls are crammed with photographs of customers past. There are more than a thousand pictures in all, dating to the 1880’s, when Thomas Honiss and Fred Atchinson purchased the then-40-year-old restaurant downstairs in the United States Hotel.

What the newspaper did not mention, and possibly because the restaurant also failed to realize it, is that Oscar Wilde also partook of Honiss’ famous oysters while residing at the United States Hotel in 1882.