Take a closer look at the details of the above cartoon.

It is one of the Fancy Portrait series from the long established satirical journal Punch and it appeared in response to the opening night of Wilde’s play Lady Windermere’s Fan at the St. James’s Theatre on February 19, 1892.

It was an event worth memorializing, not least for the occasion of Oscar’s famous curtain call, two aspects of which have become the stuff of legend.

First, that Wilde took to the stage still smoking a cigarette—which some thought disrespectful. Second, that he gave an amusing speech of playful immodesty—which others thought condescending. Or, at least they did in those stuffy Victorian days. One irate newspaper correspondent referred to Wilde’s “vulgar impertinence”. [1] These were, of course, the Victorians who could neither grasp irony nor face the change in attitudes that Wilde boldly anticipated.

Conversely, others saw no ill-manners in Wilde’s appearance at all. Indeed, the audience on the night was thoroughly amused, and one report found his demeanor “very touching”. [2]

Whichever view one took, everyone agreed on one thing: that Wilde was different. And being different is a sure way in any era of achieving the second worst thing the world: i.e. being talked about. So the story of Wilde’s curtain call  was seized upon by the press at the time and has been well-documented by authors over the years.

But it all begins with the cartoon. In it Wilde’s curtain call is immediately recognizable: the smoking, the speech, and Lady Windermere’s fan.

So as we have had journalism and biography, let us now revisit the circumstances through the prism of caricature.

The ‘Fancy Portrait’ of Wilde appeared in Punch; or, The London Charivari on March 5, 1892. It was the work of staff illustrator Bernard Partridge [2] who took his inspiration from the monument to that former great, William Shakespeare by Peter Scheemakers in Poets’ Corner of Westminster Abbey (above).

The caption refers to Oscar, facetiously, as “the new dramatic author“.

So we are invited to compare Shakespeare, elevated by a stack of his inspirational works, with Wilde, literally leaning on the influence of French literature. The fan bearing the name of Wilde’s play substitutes for Shakespeare’s manuscript, and Will’s bust has been deposed to the level of mere monarchs of the Shakespeare statue, or the puppets of Wilde’s.

The punchline to the cartoon (in italics) is our point of departure. It hypothesizes Wilde as the heir to the English-speaking stage by renaming him: Oscar Shakespeare Sheridan Puff, Esq.

From this hybrid name we see that Wilde is not only supplanting Shakespeare as the new titan of the theatre, he is also taking over the mantle of his fellow Dublin-born antecedent in the comedy of manners, Richard Brinsley Sheridan. Therefore, also at Wilde’s feet behind an open box of unpuffed cigarettes, is a discarded copy of Sheridan’s comedies.

The Sheridan connection is what bring all this puffing together.

Much is made in the cartoon of the word Puff: it appears three times in the wreaths of smoke; it masquerades Puffickly in the title; and it completes Wilde’s new name as Sheridan Puff in the caption.

Those who followed my review of Sheridan’s play The Critic, at the Shakespeare Theatre in Washington DC, will know the significance. In that lesser-known play there is a character called Mr. Puff about whom I said:

Further parallels of the proto-Wilde can be seen with the entrance of the play’s protagonist, Mr. Puff, a theatre man who introduces himself as being “at your service—or anybody else’s”.

Such is Puff’s enthusiasm for the stage that he is far too busy writing positive reviews that he has no time to actually see the plays. But, Mr Puff is a promoter with a yen to write, and as a transducer of other authors, he lays the Wildean groundwork by surviving on deceit “until one has made a tidy sum”.

In passing, there is further prefiguring of Wilde in Sheridan’s play with the evocatively named dramatist Sir Fretful Plagiary who is taunted by the critics Mr Sneer and Mr Dangle. Of this I observed:

We find in the foppish Fretful—a dramatist who never means what he says, and would rather be ridiculed than ignored. A man who has a complex relationship with the press, and thinks that newspapers are an abomination, “not that I ever read them,” he protests. This is all quite Wildean, and in one exchange Sneer and Dangle pretend to be serious about press criticisms of Sir Fretful knowing them to be made up; while Sir Fretful, aghast at thinking them real, pretends to take them trivially.

[From my Sheridan review: RBS] 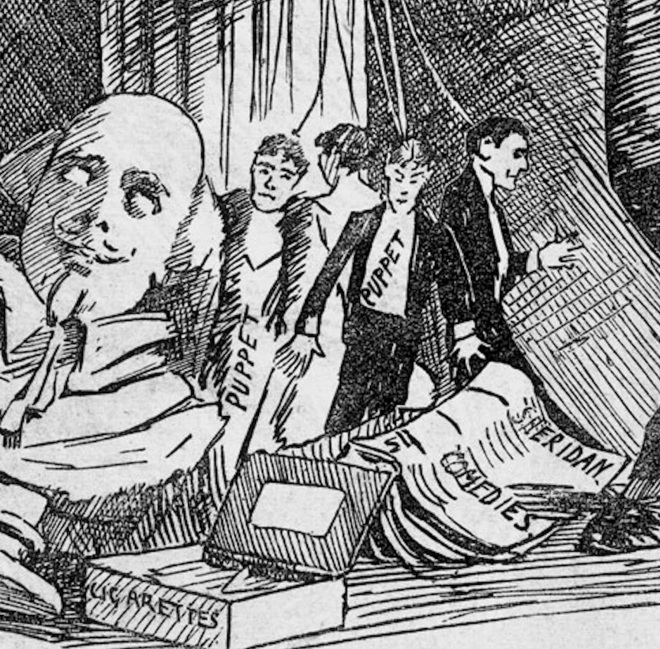 The Sheridan allusion to fraught relations with the press proved to be prescient, and the cartoon also reflects the significant interaction Wilde had with the Daily Telegraph about Lady Windermere’s Fan.

In the above close-up, at Wilde’s feet, we see four characters that Oscar is controlling with strings. These are the actors in his play, and the emphasis of the word Puppet emblazoned on them is quite deliberate.

The story briefly is that less than two weeks before the debut of Lady Windermere’s Fan and this subsequent cartoon, Wilde chaired a meeting in London of the Playgoers’ Club. Based only hearsay, the Telegraph misquoted Wilde as having said that actors were like puppets. [4] Wilde in return wrote at length to the paper a few days later (in fact on the same day that the play opened) to clarify his comments and place them into the proper context. The Telegraph published Wilde’s letter on February 20 under the heading ‘Puppets and Actors’. (Letters, 518). In the letter Wilde also took the opportunity, perhaps self-consciously, to downplay his connection with John Gray who had also spoken at the meeting.

Oscar’s comments prompted his antagonist Charles Brookfield to pen a well-received burlesque of Wilde and Lady Windermere’s Fan entitled The Poet and The Puppets, which was produced at the Comedy Theatre later that year with music by Jimmy Glover. [5]

Brookfield’s play as a travesty of Lady Windermere’s Fan is a polished mirror that reflects the furore surrounding Wilde at the time and, as such, is well worth revisiting. Wilde expert and collector, Michael Seeney, has prepared the first full edition of The Poet and the Puppets with biographical and contextual material.

The Poet and the Puppets is also, in part, an incarnation of the themes in the cartoon. Its characters include Wilde, Sheridan and Shakespeare, and one lyric from the play leaves no doubt about their relative positions. The suggestion is that since Wilde’s arrival Napoleon Bonaparte would, in deference to his famous definition, now describe England as a nation of play-stealers.

O, what a thing it is to be
A poet with a Mind!
With trousers cut off at the knee
And hair too long behind.

For when you’ve spent a lot of time,
To give that mind a show,
You feel your work is just sublime,
And tell the public so.

Which brings us to what, precisely, did Wilde tell the public on that famous night?

Replicating the shape of Shakespeare’s cloak in the cartoon is Wilde’s speech in his pocket. The inference is that his oration was prepared—but this almost certainly was not the case.

Wilde reluctantly did not expect to be recalled that night, so his words probably came to him spontaneously, and thus reinforce something innate: his persona as the ingenuous provocateur intent upon breaking the rules.

Oscar’s presumptuous pose perhaps explains why people took exception to what he said, and it was likely a similar impulse, emanating from somewhere between nervousness and egotism, that got him into trouble in court three years later.

For what he actually said we have to rely on reportage.

The most immediate source is a direct quotation from the newspaper coverage of the event. Here is what the The Morning Post said, and it all sounds ridiculously innocent today: [5]

The preciseness of this excerpt gives a sense of its being verbatim, and if so, it was probably taken down shorthand. Certainly the phraseology rings true of Wilde. His friend Louise Jopling, who attended the first night, recorded Wilde’s speech in her memoir Twenty Years of My Life (John Lane, 1925, pp. 78-82) and she tends to bear out this report, as well as defending Wilde’s nervousness in smoking.

In his speech Wilde graciously credited George Alexander, who, as producer, would have good reason to be interested in what Wilde said. So let us turn to him next.

This is a more remote source, being what Hesketh Pearson gleaned from Alexander as material for his 1946 Life of Wilde. However, Alexander lends credence to his version by his sourcing it from a member of staff at the St. James’s Theatre who, again, took down the speech in shorthand, complete Wilde’s accentuations. This is how it appears in Pearson:

“Ladies and Gentlemen: I have enjoyed this evening immensely. The actors have given us a charming rendering of a delightful play, and your appreciation has been most intelligent. I congratulate you on the great success of your performance, which persuades me that you think almost as highly of the play as I do myself.”

It has become a classic Wildean moment, the keynote no doubt being Wilde’s word almost.

This version is the one that has come down us to us via many biographies, including Ellmann. And it has also been enunciated by actors, cigarette in hand, more than once in filmed versions of the Wilde story—with varying degrees of disappointment.

Admittedly, it must have been difficult playing Oscar Wilde—he had trouble doing it himself sometimes—and so, to close, here are the attempts of Peter Finch, Robert Morley and Stephen Fry to prove the point:

The cartoon and skit of Wilde caused much amusement in 1892, but Oscar has had the last laugh. In 1995 he joined Shakespeare and Sheridan by being recognized himself in Poets Corner of Westminster Abbey, while few today treasure the memory of the cartoonist Partridge and the actor Brookfield who belittled Wilde’s place within the legacy of the theatre.

6 thoughts on “Anatomy of a Cartoon”