Nobody ever alleged that my allegiance to alliteration was anything other than alluring, so allow me to allude to this little Oscar Wilde story about the ladies Labouchère and Langtry, the Liberal, and the Lord of Language.

Or perhaps it would be even more obscure, and thus more intriguing, to say it is about Henrietta Hodson, Hester & The Two Henrys, and The Home Depot.

Either way, we must first place the tale in context.

The formative effect of Oscar Wilde’s American experience was far-reaching: it was a time during which he grounded himself in the art of public speaking, established his mode of conducting press interviews, had his iconic photographs taken, and it was where he staged his first play.

But there was a less conspicuous evolution taking shape in his literary brain.

As Wilde traveled the country he became inspired by ideas from American culture. His observations first materialized in letters that he sent home, then in early essays such as The American Invasion, Impressions of America, and The Philosophy of Dress, and they eventually occurred, and often recurred, in his short stories and dramatic dialogues such as in this example.

The starting point for Oscar, as in any expatriate adjustment, was in accepting variables in verbal expression. This is particularly true for a transatlantic traveler like Wilde who said Britain had everything in common with America nowadays except language [1].

And one example that our Lord of Language particular noted in America was the word Depot.

Depot would have been noticeable to Wilde because he was used to hearing deppo or daypo in Britain and France. Whereas, in the United States the pronunciation has long been deepo. Indeed, the word remains a challenge for the émigré wordsmith today as it is appears in the ubiquitous hardware chain store The Home Depot.

Of course, back in Wilde’s day, the word depot/deepo was primarily used as term for a railroad station—which is no doubt how it came to Oscar’s attention because he saw a lot of those as he traversed the country, including the one illustrated. [2]

A Man of his Word

Oscar was probably storing such bon mots of the new-world newcomer, and so what better occasion for him to deploy the deepo than the arrival in New York of overseas friends? Such an opportunity arose in October of Wilde’s year in America.

Lillie Langtry had recently found success in Britain as Hester Grazebrook in the Tom Taylor comedy An Unequal Match—and the play was brought to America. Her American debut was much heralded, and she arrived in New York on the S.S. Arizona—the same ship that had disappointingly carried Wilde to America in January of that year.

Oscar, of course, had to be there to meet his Jersey Lily. No surprise, therefore, that he was one of several guests aboard the steamer, Laura M. Starin, which had been commissioned by Langtry’s US manager, Henry E. Abbey, as a reception party vessel. So at daybreak on October 23rd, 1882, the Starin, complete with a musical band and an ample spread of food, steamed down the bay from the 23rd Street pier to pull alongside the Arizona.

Mrs Langtry appeared on deck as the band played Rule Britannia and, naturally enough, Oscar was the first person she spoke to over the rail. Mrs Langtry wore a close-fitting jacket over a walking dress of dark blue with thin bands of gold braid at the breast and sleeve—but as might expected, it was Oscar’s long hair, fur overcoat, and strange hat which evoked remarks from the throng.

Accompanying Mrs Langtry was her acting coach and traveling companion Mrs Labouchère, who, as the former Henrietta Hodson, had been a professional actress before she married Liberal member of parliament Henry Labouchère (now remembered as the man behind the criminal law amendment responsible for  convicting Wilde—but that’s another story). Rounding out this circle of friends  was their host Henry E. Abbey, at whose Abbey’s Park Theatre at 22nd Street and Broadway, Lillie Langtry was to  perform a week later on Monday, October 30.

The dignitaries were ushered aside by the ship’s Captain, and we have the reporter of the New York Graphic to thank for a snippet of their conversation in which Oscar, clearly tiring of the small talk, decided to brighten proceedings with his new found injunction:

A fortnight is also a transatlantically-challenged word—it means two weeks—so Oscar’s suggestion that it would take Mrs Labouchère only half as long as it took him to get over the deepo distress was no doubt meant to attest to his over-stylized sensitive nature.

However, as it turned out there would be a more real trauma for everyone to endure before the fortnight was half over.

Within a week, and on the eve of Mrs Langtry’s debut, the Park Theatre burned to the ground.

Lillie and Oscar watched the flames from nearby Madison Square: Oscar was at the Fifth Avenue Hotel, and Mrs. Langtry was lodged next door at the Albemarle in the same suite of rooms occupied by Sarah Bernhardt before her.

With theatrical superstition, Langtry mused that if the theatre sign survived the blaze she would be a success. She was proved right on both counts, but New York would have to wait to find this out, as the play had to be switched to Wallack’s Theatre where it opened a week late on November 6, 1882.

Oscar reviewed the opening night, and readers of his panegyric in the New York World, which he dashed off that night, would be left in no doubt about her success. It appeared the next day under the heading: “Mrs. Langtry as Hester Grazebrook”.

In an alignment of stagecraft that Aristotle would have envied, Henry Abbey’s Park Theatre was at 22nd Street and Broadway; Lillie and Oscar were lodged on Broadway near 23rd Street; a block away but also on 23rd Street was Booth’s Theatre where Oscar saw Mary Anderson perform; another block along 23rd Street was the New York Opera House where Oscar had seen Clara Morris just a month earlier.

And in the midst of all this, also on 23rd Street, were two other Oscar-related landmarks. Happily, both are extant and feature on my walking tour of New York.

The first (above) is Kate Field’s Cooperative Dress Association at 31-33 West 23rd Street where, on the fifth floor reception rooms, Wilde was treated to what the press described as ‘a bohemian luncheon.’ The hostess and president of the cooperative was Kate Field, a journalist, lecturer, and actress, who became a good friend to Wilde and who took to renouncing the public ridicule of him.

The second is Stern Brothers‘ magnificent flagship emporium directly across the Street. Stern’s was a six-story edifice whose modern cast iron frame supports a delicately detailed facade animated by Romanesque arches. Over the splendid entrance still resides the company’s monogram (SB) in the cartouche above a lion’s head. 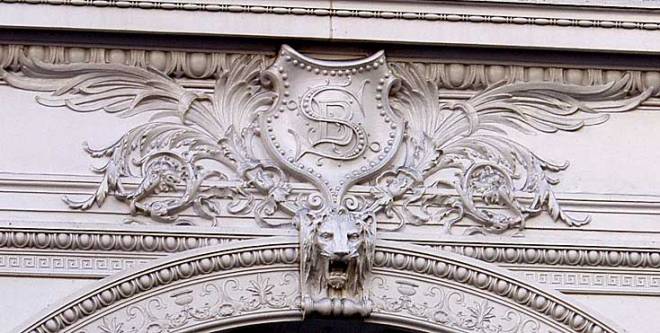 Although Stern Bros was essentially a department store (perhaps the world’s first), it was here that the set decorations were made for the first ever production of a Wilde play Vera; or, The Nihilists at New York’s Union Square Theatre. [3]

One can imagine Oscar visiting Stern’s to oversee the stage draperies, strolling past the mahogany elevator and Minton tile, admiring the velvet, silk and lace, or perhaps sampling the perfume of the rose water.

And all the while oblivious to an ironic twist in the tale that he would have surely appreciated.

That one day this triumph of Renaissance revivalism would be revisited incongruously amid the downtown hustle of twenty-first century Manhattan.

[1] My analysis here shows how the remark has been misattributed.

[2] Oscar passed through Council Bluffs on a visit Odgen House when lecturing in Omaha. See note at the foot of this page.

One thought on “Deepo”