In a recent post I noted how Oscar Wilde and Sarah Bernhardt had stood in precisely the same spot when having their photographs taken by Napoleon Sarony.

It was just a curiosity; but now Lillie Langtry makes it a mystery.

When I pointed out the coincidence that Oscar Wilde and Sarah Bernhardt had posed in the same place against he same wall, it was argued that the wall may have been a common setting used by Sarony, perhaps good for lighting or other effects.

So, in an effort to debunk my own theory, I embarked upon a search for other examples. I could not find any. None.

And Sarony photographed over 40,000 subjects.

Naturally, I haven’t seen them all, but it did seem strange that, like cucumbers, there were none to be had, not even for ready money. I was about to give up the search and rejoin the world of people with better things to do.

And then I chanced upon a Sarony photograph of Lillie Langtry.

Not only was she against the same wall—she too, was in the same spot.

Now, you might think this reinforces the idea of the wall being a common setting, and I would tend to agree if the three subjects were not so closely connected with each other, and there were other examples.

But I can’t find any. So would someone please put me out of my misery, and find someone else in a Sarony photo against this wall.

Finally, it was also suggested that the wall may be a prop—a moveable background that was not in common use, although this would not explain why only these connected people evidently chose to use it. Besides, in this picture below, the wall looks real and Bernhardt is the one in need of being propped up. 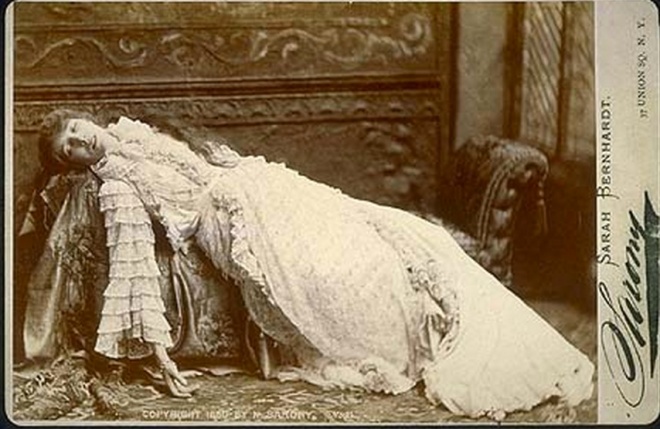 5 thoughts on “Back To The Wall”