by John Cooper
With the kind assistance and guidance
of Rob Marland and Matthew Sturgis. *

The artist Banksy has recently demonstrated that deliverance from Reading Gaol remains a popular concept. But, as you might imagine, Oscar Wilde’s real life liberation from the prison was an even more newsworthy event back in 1897.

Oscar himself attested to the potential for a public invasion of his privacy. This is what he wrote to his dear friend, Reggie Turner, just prior to his release:

Already the American interviewer and the English journalist have arrived in Reading: the Governor of the Prison has just shown me a letter from an American interviewer stating that he will be here with a carriage on Wednesday morning for me, and offering any sum I like if I will breakfast with him! Is it not appalling?

The archive photograph of Reading Gaol (above) curiously portends such a carriage handover. But, of course, no interview took place outside Reading prison—appalling breakfast or otherwise—nor could it, because Wilde was not discharged from the prison system at Reading. He was spirited 43.8 miles away to be released from Pentonville Prison in London, his first place of incarceration.

This subterfuge, and others along the way, protected Wilde’s seclusion well enough, and so history has chronicled Wilde’s removal from Reading free from the Fourth Estate.

But now it is time to reconsider the event—particularly for those who might underestimate the doggedness of the Victorian press. Could it really be possible that, in fact, there exists a hitherto forgotten prison interview?

As remarkable as this sounds, it appears that a media dialogue of sorts could have taken place with Wilde at Reading Gaol.

—THE POWER THAT IS IN ME WILL RESUME ITS SWAY—

In anticipation of Wilde’s impending release from prison on May 19, 1897, journalists began to gather in the town of Reading in search of a story. But there was one scribe who had had his finger of the local penitentiary pulse for some time.

That man was the trusty American reporter Frank Marshall White, currently the London correspondent for William Randolph Hearst’s New York Journal—and thus wireman to all of the other US-syndicated titles of the Hearst Corporation.

In May 1897, White was stationed in Reading with an evident a zeal for ‘inside’ knowledge of Wilde’s temporary abode. For at least a week before the ballyhoo really began, White had been reporting, albeit with varying degrees of accuracy, Oscar’s daily routine at Reading (and Wandsworth). He noted Wilde’s grueling diet, his prison chores, his current weight, the length of his hair, and his still clean-shaven state of appearance. He also revealed the name of Wilde’s prison chaplain (M. T. Friend) to whom, it can be inferred, he had spoken. [1]

But as Wilde’s release date approached, news was still thin on the ground.

We now know that in his last few days in his cell at Reading, Wilde was busy continuing his correspondence with Ernest Leverson about financial matters. He also wrote two long letters to Reggie Turner making arrangements for his post-prison life; another to More Adey; yet another to Robert Ross; and finally a note to his kindly warder, Thomas Martin, offering to pay to have some hungry children released from the horrors of prison remand.

Clearly, Wilde was preparing to leave Reading. The question was when?

The word on Fleet Street was that Wilde might be moved from Reading before his official release. Accordingly, Frank White connected the grapevine wires to his readers with the news that: “reporters were swarming in Reading today, as it is rumored that Wilde’s friends will obtain permission from the Home Office to remove him secretly from the prison before his term has entirely expired.” [And, of course, this is precisely what happened.]

So to Frank White in Reading, possibly charged with gaining a first-hand interview, it was becoming increasingly conspicuous that all he had offered his editor so far was second-hand gossip.

Robert Batho, a freelance journalist in England (and later an editor and author in Canada), was a contributor to several newspapers including London’s Evening News. He was apparently possessed of a Zelig-like ability where Oscar Wilde was concerned, and claimed to have been the source behind verified interviews with Wilde on three earlier “epochs” (as he called them) in Wilde’s career. [2]

Just the man, therefore, to join forces with Frank White at Reading Gaol.

Consequently, White and Batho, formed a transatlantic alliance, and they are most likely “the American interviewer and the English journalist” whose letter the Governor had shown to Wilde requesting the post-prison interview—a request no doubt denied.

Denied, yes, but Batho was not to be rebuffed. Perhaps leveraging his track record with Wilde, or by simple ingenuity, the English journalist apparently sought to eke out an alternative form of access.

In the published “interview” White explained how it came about: 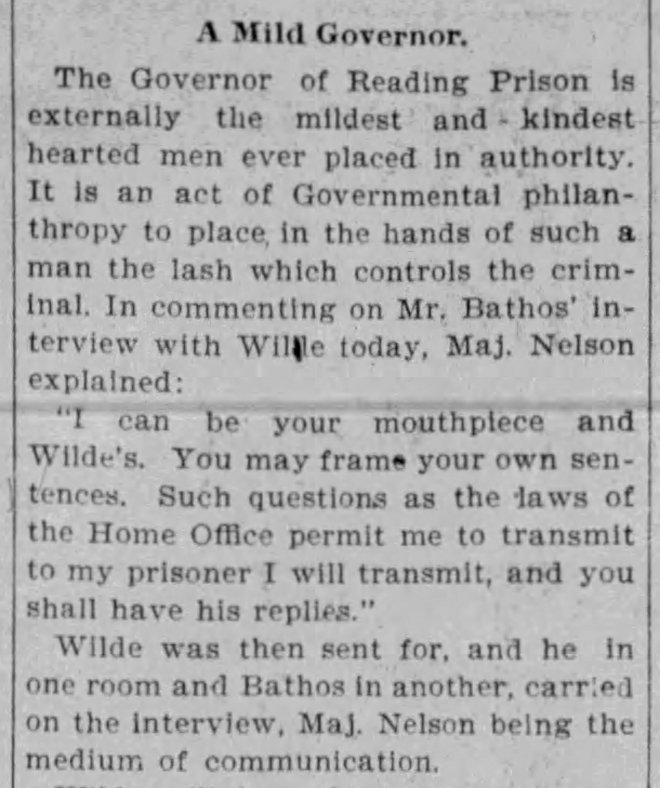 In Carcere, Et In Diurna?

The result was a short interview with Wilde which White sent via special cable to New York where it appeared in the morning edition of The New York Journal.

Later Hearst imprints, with the advantage of the time delay, such as the San Francisco Examiner, and the one below from the Buffalo Evening News of May 17, 1897, identify Batho as the person who conducted the interview and also expand on his history with Wilde.

Note about the text: This is the most common text of the interview in which some questions are implied by conflating answers, a style common in interviews and court reporting. In some other versions, however, for instance in The Chicago Tribune, the same interview is given as a more verbatim conversation.

What are we to make of the “prison interview”?

Whether Batho actually gained entry to the prison or, perhaps, merely handed in written questions at the gate and was given a written reply, does not seem to matter as much as the idea of using an intermediary—which does appeal as it might have allowed the Governor to bend the visitation rules without breaking them.

In evaluating the interview, these are the points to be considered, and on balance they generally favor plausibility:

[2] Robert Batho had a long career in journalism in England and Canada. For details of this “prison interview” and his previously attributed encounters with Wilde, see Robert Marland’s forthcoming Oscar Wilde, The Complete Interviews, (2021).

The sketch of Wilde in prison at the top is from The Illustrated Police Budget with the caption: Can you imagine what the mental and physical sufferings of a man of the Oscar Wilde temperament must be?’

MATTHEW STURGIS
Matthew Sturgis is a historian, critic, and the acclaimed biographer of Oscar: A Life (2018).